On Jan. 16th LIVALL held its annual conference under the theme "Dream and Strive" where LIVALL's founder and CEO, along with all departments' directors gave their speeches reviewing the past 2015 and foreseeing the coming 2016. The conference also featured the first share option awarding ceremony where a few core staff signed option awarding agreement with Mr. Brian Zheng. 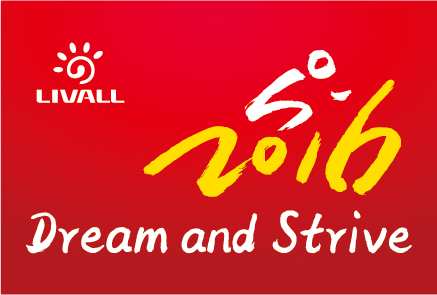 In 2015 LIVALL accomplished several crowdfunding campaigns on JD, Indiegogo and Kickstarter and took part in many influential competitions in which it won six major prizes. LIVALL also joined in many large scale cycling events and sponsored some strong cycling teams. Meanwhile LIVALL took part in both domestic and international exhibition shows. During this year LIVALL was intensively reported by numerous renowned media. In CES 2016 LIVALL smart helmet was the only Chinese smart product selected in the final competition of “Last Gadget Standing”.

In the future LIVALL will expand its overseas market while breaking through a few technical barriers and bring about more pleasant user experience to cyclists.

As a dream cherishing Chinese startup LIVALL will support everyone with dreams in their personal career.  Therefore LIVALL held its first share option awarding ceremony where a few core staff who have been working for LIVALL for over one year signed option awarding agreement with Mr. Brian Zheng.

The conference was held in an eco tourist holiday villa.  LIVALL hopes to refresh urban life by encouraging more people to join in cycling. After the conference came a magnificent party. Apart from the wonderful performances Brian and leaders of different departments offered staff red envelops and prizes ranging from bicycles, helmets to house appliances. On Jan. 17th LIVALL employees participated in an overall team building outward-bound training to enhance its teamwork capability.