the successor to the BH51 and BH60 / 62 models. It scores with its modern look, app support and

more safety on the road with the BH51M Neo. The smart functions increase comfort and safety and

point far into the future and should also inspire the competitive environment. The LIVALL BH51M Neo

possibilities. Cyclists who like to be navigated using voice instructions or who make a lot of phone calls while

from LIVALL. Why should cyclists be worse off than drivers? Bluetooth headsets usually close the ear canal

and are therefore a security risk and not compliant with the road traffic regulations. The two tiny helmet

loudspeakers are always there and do not suppress the important traffic noises. In addition to these killer

LIVALL has developed its BH51M further and now offers its users a bit more security with smart protection.

basis.The helmet has features such as LED light and indicators, media playback via Bluetooth, loudspeaker,

front and rear lights with an indicator function. The darkness sensor automatically adjusts the helmet to the

changing light conditions. The entire lighting and its signals can now be seen from the front, from the side and

from behind - i.e. 360 degrees around the helmet. This significantly increases the perception of other road users. 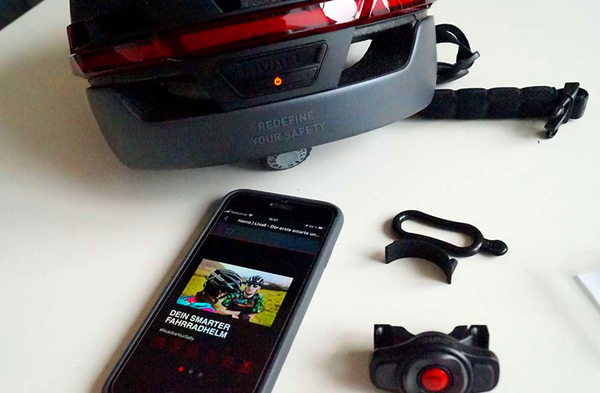 Just under 23 percent of cyclists in 2019 wore protective helmets. Young adults, in particular, are increasingly

protecting themselves with a helmet. This is the result of surveys that are carried out annually on behalf of the

Federal Highway Research Institute (BASt). The helmet-wearing rate among cyclists has increased across all age

groups by almost five percentage points to almost 23 percent since the previous year's survey, reaching its

highest level to date. There are increases in particular in the 17 to 21-year-olds (from 8 to 14 percent), in the 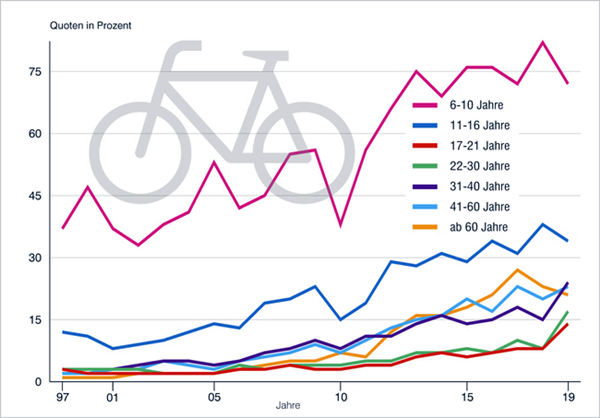 unanimously recommend Helmet on while cycling - and this at any age. And currently also for the people who

switch from public transport to bicycles in the Corona crisis to protect themselves against infections. In some

places, there was a note on digital traffic signs: Cycling to work protects against infection #FlattenTheCurve. "

Switching to the bike for reasons of infection protection is to be welcomed. But don't forget your head

The DGOU has been campaigning for a higher helmet wearing rate for years. Because specialists in orthopedics

and trauma surgery see every day at work what consequences a fall on the unprotected head can have. Data

of the DGOU Prevention Section and Senior Physician at the Clinic for Trauma Surgery, Orthopedics and 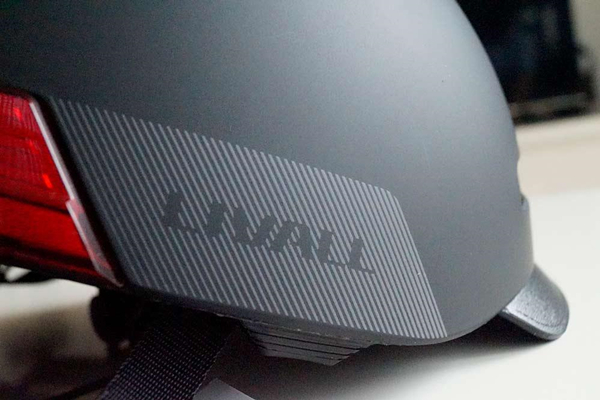 According to data from the Federal Highway Research Institute for 2018, the helmet wearing rate was an

average of 18 percent across all age groups. The ratio of adults was significantly lower than that of

children: in 2018, 82 percent of children between the ages of six and ten were wearing helmets. Then

the helmet wearing rate drops significantly: 38 percent of 11 to 16-year-old cyclists wore a helmet. For

teenagers and adults aged 17 and over, the helmet wearing rate was only between 8 and 23 percent.

The preliminary accident statistics for 2019 also show Last year, according to the Federal Statistical Office,

⦁ Auto Off and Anti-Loss Alarm

⦁ Intelligent design: Comfortable, extremely light, stereo sound
⦁ SOS Fall detection system with a GPS data after an accident being sent to a contact in the app. 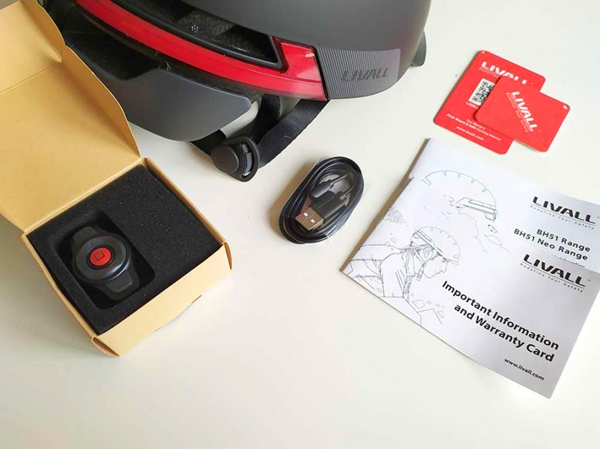 Bicycle helmets should generally be worn on all bike tours - and not just by children. A helmet can save lives

in an emergency. A bicycle helmet protects against head injuries in the event of a fall by the built-in foam

taking over the function of a crumple zone. The helmet absorbs the energy and the force of the impact. Even

if there is no compulsory cycling helmet in Germany, the cost of a helmet is in no comparison to the benefit.

Numerous statistics show that cycling helmets can prevent serious injuries. Many injuries can be prevented or at

least significantly reduced by wearing a helmet be it lacerations, abrasions, bruises, concussions or whiplash injuries.

At around 480 grams, the helmet weighs just under half a kilogram. Given the additional functions, this is easy.

Commissioning is quick. After unpacking, you should first fully charge the helmet. The helmet comes with

a USB cable with a proprietary connector. Then, after switching on the helmet, you can pair/pair a with the

smartphone via Bluetooth. This works straight away on Android and iOS. To do this, you should first download

the free smartphone app "LIVALL Riding" (Android / iOS). For the bicycle handlebar, there is a remote control

with a quick-release via rubber tensioner. This remote control is always on. The firmly integrated button battery

should last up to two years. The control unit automatically couples to the helmet. If the helmet is only to be used

to indicate the direction by flashing, a smartphone and app are not necessary. The length of the chin strap could

be quickly and easily adjusted to the head size and ear area.The helmet must be switched on and off manually. The

radio remote control for the handlebar, however, is always on standby. 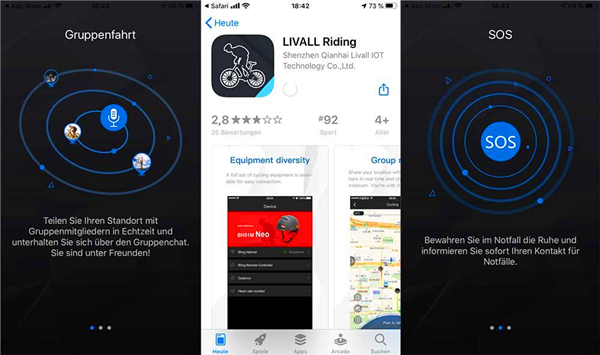 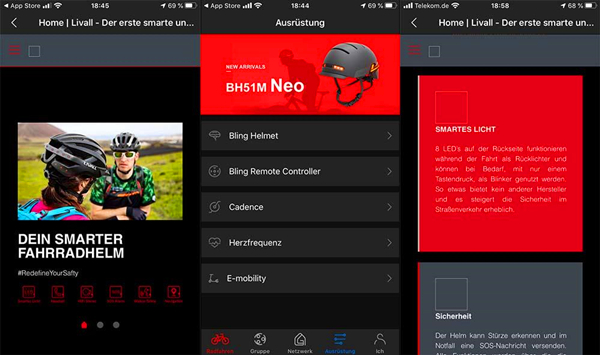 The BH51M Neo in the colours "black" are available in two sizes. Eight LEDs on the back work

as taillights while riding and can be used as indicators, if required, with just one push of a button. The LED strips

on the rear of the helmet are hardly noticeable when switched off, the LEDs on the front are practically invisible.

ears. When switched off, the smart LIVALL Helmetphone looks like an ordinary bicycle helmet. First switched

on - via the rubber button on the back of the helmet, the light and audio signals reveal the extensive smart

functions of this helmet. The brake light function of the rear lights represents an innovation and valuable

safety feature: the accelerometer in the helmet detects a delay in movement and make the red light of the

LEDs light up more brightly. If the smartphone connected to the helmetphone loses its connection to the

helmet or is lost the Rider is informed of this by an acoustic signal, the anti-loss alarm. In Addition, the helmet is

adequately protected against moisture according to IPX4.

in the area of the headrest and forehead without causing pressure points. Shell and inner lining allow good

ventilation even at high temperatures. Pleasingly, the acoustic perception of traffic is not lost, which is relevant

for safety. The side micro speakers do not decouple from traffic. A classic strap fastener ensures a secure hold,

which is easy to use and can be optimally adjusted. 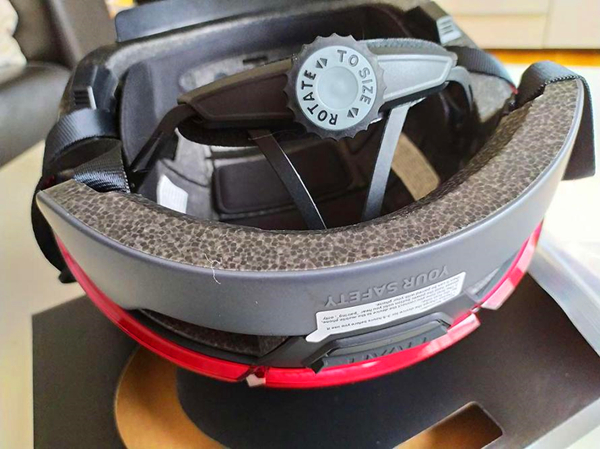 If you value active safety in traffic and at the same time, rely on communication and media playback functions

while cycling, the LIVALL is a recommendation. For this application and that of the walkie-talkie chat (to another

Livall helmet wearer in the immediate vicinity), the smartphone is paired with the helmet and the small waterproof

the functions and, thanks to the open design, even while listening to music or telephoning, ambient noise can still

be heard without any problems. The BH51M Neo offers several intelligent functions compared to conventional bicycle

helmets. The most important feature of the BH51M Neo is its LED lighting function on the front and back of the

helmet. The brightness of the LEDs is automatically adjusted with a light sensor. In combination with the turn

signal function, wearers of the BH 51M Neo are usually much more visible due to the orienting reflex of other

road users. They are recognized and perceived earlier than without or within a conventional helmet.